Translucent scale typically appears after harvest and worsens after 3-4 months of bulb storage. The onion scales take on a grayish watery texture making them appear translucent. All scales can be affected, however, typically only the second and third fleshy scales exhibit symptoms. These symptoms are similar to freezing injury and can be distinguished from it only when it is known the bulbs were not subjected to cold temperatures. Also, frost damage occurs from the outside in, and opaque white tissues are often produced within frost damaged scales. 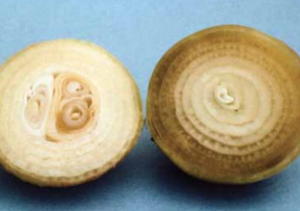 Bulb cross-section showing the grayish watery texture of the scales

Onion bulbs should be cured properly and stored at the appropriate temperature [0°C (32°F)] and relative humidity.