Sunscald is primarily a problem on young seedlings and mature bulbs. High soil temperatures damage seedling tissue at the soil line, resulting in shriveling and collapse of plants. On onion bulbs, affected tissue collapses and becomes bleached, soft and slippery. Affected areas dry and shrivel rapidly, and scales eventually become brown and necrotic. Soft rot organisms can invade and decay the bulbs if sun-scalded onions are not dried and cured rapidly. 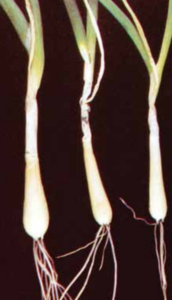 At the soil line affected tissue shrivels and collapses. 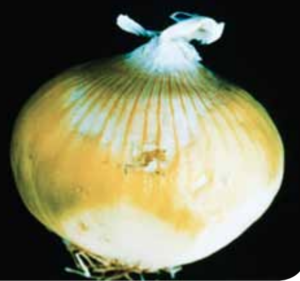 Direct sun can heat dark soils to temperatures as high as 65°C (149°F) resulting in tissue death at the soil line. Harvesting and curing onions in direct sunlight can result in sunscald on the bulbs.

Sow onion seed to avoid high soil temperatures when seedlings are succulent and most susceptible to sunscald. Onions can be cured in the field only after day-time high temperatures are below 29°C (85°F). If curing is done in the windrows, the tops of one set can be used to cover the bulbs of the previous set.