The following symptoms are indicative of nutritional deficiencies, however, soil and foliar fertilizer analyses should be conducted to verify nutritional needs:

Nitrogen: Deficiencies result in stunted plants with pale green to yellow leaves that dieback from the tips. Also, the foliage tends to be erect and the bulbs are smaller than normal and mature earlier. Excess nitrogen causes rapid plant growth and delays maturity. The bulbs tend to be softer and more susceptible to storage rots.

Phosphorus: Deficiencies result in slow growth, delayed maturity and a high percentage of thick necked bulbs at harvest. Leaves become a dull green color and dieback from the tips without the yellowing associated with nitrogen and potassium deficiencies.

Potassium: Deficiencies result in the foliage initially becoming darker green and the tips of the older leaves begin to wilt, especially on the upper surface. Eventually the leaves droop and take on a satiny progressing to paper-like appearance and develop chlorosis similar to that caused by nitrogen deficiencies.

Molybdenum: Deficiencies result in poor emergence and seedling death. As the plant grows, leaves will dieback from the tip with a noticeable soft transition zone between the healthy and necrotic tissue. Onions are very sensitive to molybdenum deficiencies.

Manganese: Deficiencies result in slow growth, delayed maturity and a high percentage of thick necked bulbs at harvest. The older leaves develop interveinal chlorosis, which progresses to a tip-burn, and they may curl and eventually become necrotic. Onions are very sensitive to manganese deficiencies.

Boron: Deficiencies result in distorted and stunted plant growth. Leaves become brittle and may turn a gray-green to a blue-green color. Young foliage may be a mottled yellow green while older leaves become chlorotic with tip dieback and sunken areas. Transverse yellow lines that develop into cracking can occur near the base of the leaves. 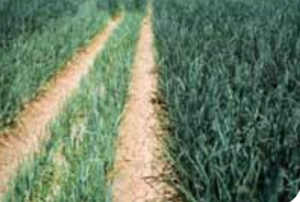 Acid or alkaline soils often lead to nutrient deficiencies due to the immobilization of the nutrients. Some soils are naturally low in specific nutrients due to their composition. The excessive, or unbalanced, use of fertilizer may also cause some nutrients to become unavailable to the plants.