The aster leafhopper (Macrosteles quadrilineatus), many other species of leafhoppers

In bulb crops foliar symptoms begin as yellow and green streaks at the base of young leaves. Affected leaves will flatten and occasionally twist and intertwine. Eventually, entire leaves become yellow. In seed crops the umbel will have a star-burst appearance with elongated pedicels and distorted flowers. Occasionally, small bulbs will form in the flowers instead of seed. 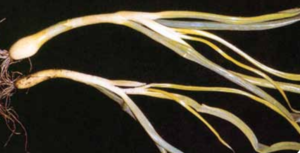 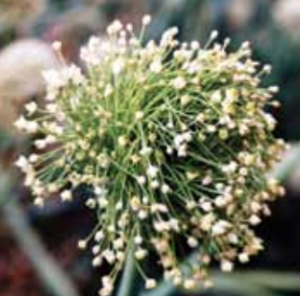 The aster yellows phytoplasma is transmitted during feeding by the aster leafhopper, Macrosteles quadrilineatus. Conditions that favor succulent plant growth may result in more leafhoppers being attracted to these plants and increase the incidence of this disease.

This phytoplasma can over-winter in adult leafhoppers, grains, weeds and ornamentals and therefore, a good weed and leafhopper control program can be effective in reducing the incidence of this disease. Isolating onion seed crops from other host crops and weed sources may also be effective.