Symptoms manifest as localized wilting at leaf margins. Wilted tissue becomes chlorotic and progresses to form the characteristic V-shaped lesion associated with this disease. Within chlorotic tissue, leaf veins turn black, giving the disease its name – black rot. At advanced stages, affected tissue becomes brown and necrotic. Black leaf veins may extend from the affected leaf into the main stalk where the darkened vascular system may be visible. As the disease progresses into the vascular system, lesions resulting from systemic invasion may appear along leaf midribs and between leaf veins. Systemically infected plants may be stunted and develop more severe symptoms on one side of the plant. In affected cabbage, heads are smaller and outer leaves may senesce. The disease can progress on cabbage during storage, making the heads unmarketable. Under cool conditions, symptoms may be confused with those caused by Pseudomonas syringae pv. maculicola (Peppery leaf spot) or Xanthomonas campestris pv. armoraciae (Xanthomonas leaf spot). 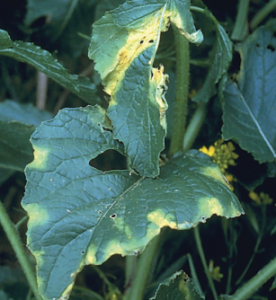 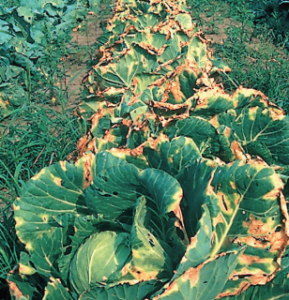 The black rot organism can survive in crop residue for up to two years. The bacterium can also infect cruciferous weeds, such as pepper grass (Lepidium virginicum), wild radish (Raphanus raphanistrum), black mustard (Brassica nigra), wart cress (Coronopus didymus), wild turnip (Brassica campestris) and others. These weeds, as well as nearby crucifer crops, can serve as reservoirs for the bacterium, which may subsequently spread to healthy crops. Though hydathode infection is most common, stomatal entry may occur when plants are subjected to heavy rains or irrigation. The organism can also enter through natural wounds in the root system during periods of soil saturation. With warm temperatures of 27-30°C (81-86°F), symptoms may appear in 10 to 12 days. However, under cool conditions, an infected plant may not show symptoms. Spread of the disease in the fi eld generally occurs by wind-blown Black Rot rain, irrigation water, cultivation, insects or animals. The bacterium can be seedborne, which may result in seedling infection. Secondary infection from black rot-infected seedlings may occur in nurseries or seed beds and the disease generally spreads rapidly during transplant/growing operations.

Use high-quality seed free of X. campestris pv. campestris. Implement a three-year rotation to noncruciferous crops. Seed beds should be geographically isolated from commercial crucifer crops. Do not mow or clip transplants. Plant crops in well-drained soils and use irrigation practices that minimize leaf wetness. Keep fields free of cruciferous weeds. Disinfect seed beds and equipment with steam or germicidal sprays before use. Control insects to minimize spread of the pathogen.