» Bean diseases caused by viruses can cause significant reductions of yield and pod quality.
» Viruses that infect bean are transmitted (vectored) by insects including aphids, leafhoppers, whiteflies, and thrips.
» Management strategies for viral diseases should include planting disease-free seed and resistance when available.

The symptoms of many viral diseases of bean are similar, and diagnosis in the field based on symptoms alone is very difficult and not recommended. Plants suspected of virus infection should be evaluated in a plant diagnostic clinic to verify the specific viruses present. Knowing which virus is causing the problem is important for the implementation of appropriate management strategies, including the selection of disease resistant varieties.

Bean common mosaic (BCM) is caused by the Bean common mosaic virus (BCMV) in the western hemisphere. Infection by this virus results in a mosaic pattern (alternating patches of light and dark green) developing on the leaves (Figure 1). Some puckering and downward curling of the leaves may also occur.1  Symptoms are most distinct at temperatures between 68 and 77°F. 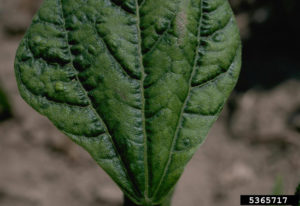 BCMV overwinters in infected weed hosts and in infected seed.2 The virus is most commonly transmitted from plant to plant in the field by aphids. However, the virus can also be transmitted through infected pollen and through mechanical transmission, the transfer of sap from an infected plant into small wounds of another plant.

Using certified, disease-free seed prevents the introduction of BCM on seed, and most commercial bean varieties have some level of resistance to BCMV.1 There are several strains of BCMV, and several resistance genes are used in commercial varieties. Both strain non-specific resistance (bc-u) and strain-specific resistance genes (bc-1, bc-12, bc-2, bc-22, and bc-3) are available. Bean varieties that include a combination of these genes (bc-u+bc-3 or bc-u+bc-22+bc-3) exhibit fairly high levels of resistance to most commonly occurring strains of the pathogen.2 The cycle of plant to plant spread can be broken in some areas, such as southern Florida, by an extended (3-4 months) bean-free period in the summer, but organizing and enforcing such bean-free periods can be challenging.3

Bean yellow mosaic (BYM) is caused by the Bean yellow mosaic virus (BYMV) and also causes a light and dark green mosaic pattern on the leaves, often with the presence of bright yellow spots (figure 2).2 Some strains cause a malformation of the leaves and a mosaic and distortion of the pods. Infected plants can be stunted and bushy. 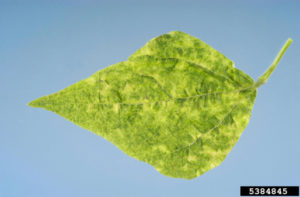 This virus also overwinters in weed hosts and is vectored by aphids. Like BCMV, BYMV can also be mechanically transmitted. However, BYMV is not known to be seedborne.

There are several strains of BYMV, and strain-specific and general resistance genes are available in some dry-bean cultivars. Resistance to BYMV is not readily available in commercial snap bean cultivars. Managing the disease by controlling weed hosts or aphids is usually not effective.1

Symptoms of infection by the Clover yellow vein virus (CYVV) vary with the strain of the virus present, the cultivar, the time of infection, and the environment.2 The disease typically shows as a prominent green-yellow mosaic on the leaves, stunting of plants, and severe distortion and mottling of the pods. A vein necrosis symptom develops in some cultivars.

The virus most commonly spreads from infected clover plants and is transmitted by aphids. No seed transmission of CYV has been demonstrated. Resistance to CYV is not available in commercial snap bean varieties.2

Curly top of beans, caused by the Beet curly top virus (BCTV), is most problematic in the western, semi-arid growing regions of the U.S.2 Symptoms can vary with virus strain, cultivar and host growth stage, and temperature. Leaf symptoms include puckering and a crookneck malformation of the trifoliates (Figure 3). Infected plants are severely stunted and bunched, and plant death can occur within a few weeks of infection. 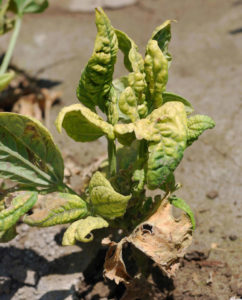 This virus is transmitted by leaf hoppers, which do best in the hot, dry conditions of the west. Both the virus and the leafhopper overwinter on a number of hosts including winter annuals such as mustards. As these hosts dry down in the spring, the leafhoppers migrate to green, irrigated crops in the region, spreading the virus as they feed. BCTV is not seedborne, nor is it mechanically transmitted.

There are some snap bean cultivars with resistance to curly top4, and late planting, after major migrations of the leafhopper vector, can reduce the amount of disease on susceptible varieties.2

Bean golden mosaic (BGM), caused by the Bean golden mosaic virus (BGMV), can occur in the far southern parts of the U.S., in the Caribbean, and in Mexico. Symptoms of this disease include a bright yellow or golden mosaic pattern on the leaves, leaf rolling, stunting of plants, flower abortion, and pod distortion (Figure 4).1,2 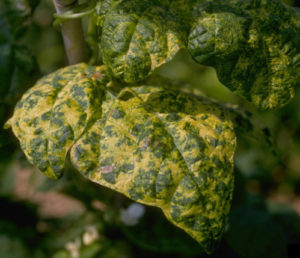 BGMV is transmitted by whiteflies, and the disease is most likely to occur during warm (80°F), dry periods that favor the movement and reproduction of whiteflies.2 Avoid planting beans during these warm, dry periods when whitefly populations are high. Also, avoid planting as other reproductive hosts of whiteflies (e.g. soybean) start to decline, promoting the movement of the vectors. Resistance is available in a few common bean varieties.2

Red node is caused by the Tobacco streak virus (TSV) and occurs on beans in the southeastern U.S. and Mexico. The distinguishing symptom of this disease is a reddening of the nodes on the stem, and infected plants can bend and break at the nodes. A necrosis of the veins will sometimes develop on the primary leaves, and red ring spots can form on the pods.2

TSV overwinters on a number of legume hosts including sweet clover. The virus is transmitted by thrips, and seed transmission has been observed in beans. Planting disease-free seed and controlling the leguminous weeds that can be sources of the virus will help prevent this sporadically occurring disease.

Symptoms of cucumber mosaic, caused by the Cucumber mosaic virus (CMV), can include a mosaic discoloration and severe distortion of the leaves, and pods may become curved and mottled.2 CMV is transmitted by aphids, including the soybean aphid, and the virus can be seedborne. CMV can overwinter on many plant species. Controlling this disease is difficult, as there is no good resistance available in snap bean cultivars. Use of virus-free seed may reduce incidence levels in areas where the virus is not present in weed and other crop species. Destroying reservoir hosts and controlling the aphid vectors may reduce the spread of CMV, but this strategy is often not feasible.2

Individual results may vary, and performance may vary from location to location and from year to year. This result may not be an indicator of results you may obtain as local growing, soil and weather conditions may vary. Growers should evaluate data from multiple locations and years whenever possible. ALWAYS READ AND FOLLOW PESTICIDE LABEL DIRECTIONS. The recommendations in this article are based upon information obtained from the cited sources and should be used as a quick reference for information about bean diseases. The content of this article should not be substituted for the professional opinion of a producer, grower, agronomist, pathologist and similar professional dealing with this specific crop

SEMINIS DOES NOT WARRANT THE ACCURACY OF ANY INFORMATION OR TECHNICAL ADVICE PROVIDED HEREIN AND DISCLAIMS ALL LIABILITY FOR ANY CLAIM INVOLVING SUCH INFORMATION OR ADVICE. 1160727161841 092216DME